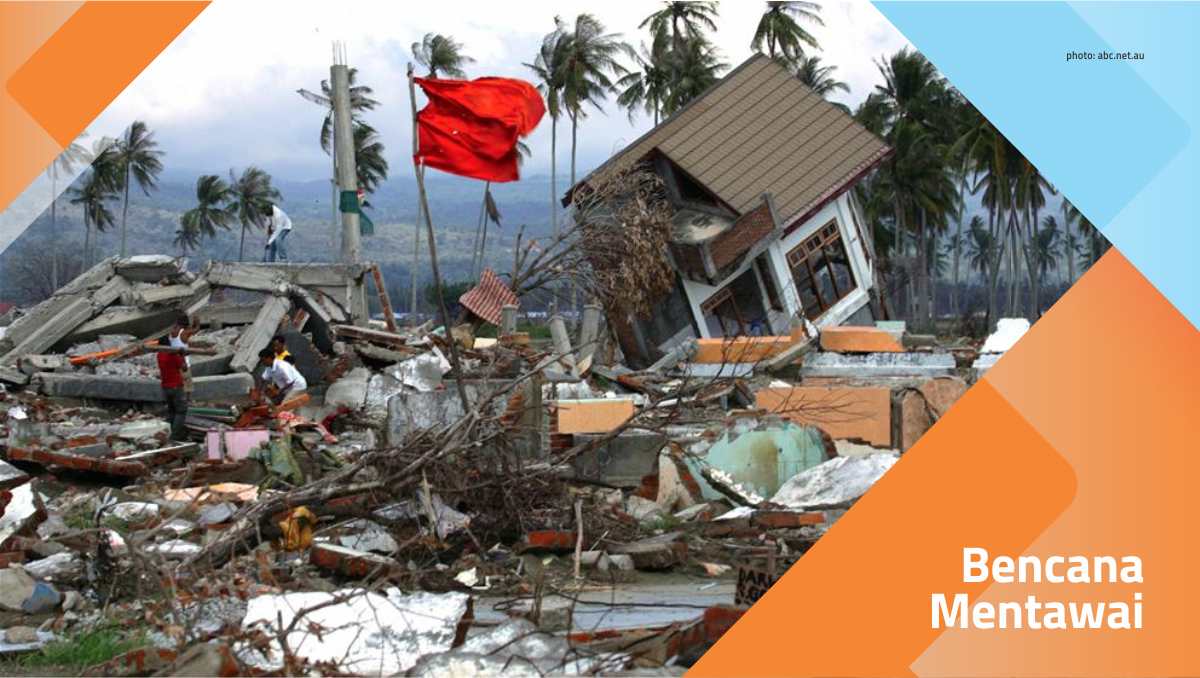 The earthquake and tsunami in the Mentawai Islands, West Sumatra, occurred on October 25th, 2010. The United States Geological Survey (USGS) declared a 7.7 Richter scale earthquake occurred at 21:42:22 local time, at a position of about 240 km west from the Bengkulu Province, close to the Mentawai Islands. Earthquakes are reported to occur at a depth of 206 km below sea level.

The Meteorology, Climatology and Geophysics Agency (BMKG) immediately issued a tsunami warning. However, the warning was later revoked after a possible tsunami threat passed. After the warning was lifted, tsunami waves as high as 3-10 meters struck the Mentawai Islands and destroyed at least 77 villages.

It was reported that 286 people died, 252 people missing and about 200 people suffered injuries, both heavy and light. Because the location of the disaster is relatively remote and can only be reached by ship, report of victims was delayed.

Since 2010 until now, Mount Sinabung in North Sumatra has been active and has experienced several eruptions. At the biggest eruption, nearly 30,000 people were displaced.

Currently, 1,873 families previously living in unsafe zones have been relocated to safer locations. Meanwhile, 1,080 families are still living at the refugee camps and are waiting to be moved to a new residence.

In 2010, one person died from respiratory problems while evacuating from his home. In 2014, 14 people founded dead and 3 people injured by hot clouds glide.

The eruption in 2016 claimed as many as 7 people died and 2 others burned. At the last eruption, in 2018, there was no death reported.

Balai Penyelidikan and Pengembangan Teknologi Kegunungapian (The Volcanoes Research and Technology Development Agency or BPPTK) in Yogyakarta has recommended to increase Mount Merapi status from "Normal Active" to "Alert" on September 20th, 2010. The first eruption of Mount Merapi occurred on October 26th at around 17:02 pm. At least there were three eruptions that erupted volcanic material as high as approximately 1.5 km and accompanied by the release of hot clouds.

Starting October 28th, Mount Merapi spewed lava incense that appears almost simultaneously with the release of hot clouds. Since November 3rd, there has been an increase in lava and hot cloud activity. On November 4th morning, a major eruption resulted in cloud columns as high as 4 km and bursts of hot clouds to various areas at the foot of Mount Merapi.

Furthermore, since about three o'clock in the afternoon, there were a continuous eruption until night and reach its peak in the early hours of November 5th, 2010. Pebble and sand reach the northern city of Yogyakarta, while heavy volcanic ash rain struck until Purwokerto and Cilacap in Central Java. In the afternoon, volcanic ash is known to have reached Tasikmalaya, Bandung, and Bogor in West Java.

According to data from the National Disaster Management Agency (BNPB) on November 18th, 2010, the death toll reaches 275 people. 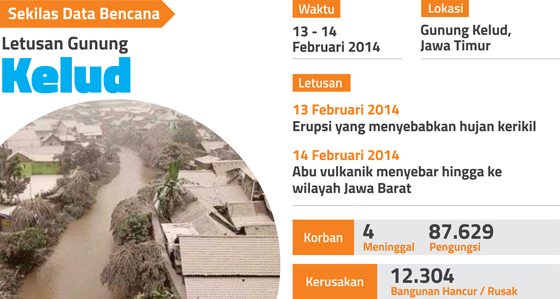 Increased activity of Mount Kelud has been detected since the end of 2013. However, then the situation became quiet again. On February 2nd, 2014, the authority announced the increase of status from "Normal Active" to "Alert". On February 10th, the status was raised to "Standby" and on February 13th, at 9:15 pm, it went to the "Caution" stage.

In less than two hours, at 22:50, the first eruption occurred. Eruption caused gravel rain in Ngancar and Kediri sub-districts, East Java. The sound of explosions was reported to be heard in Surabaya, Solo, Yogyakarta and Purbalingga (about 300 km away from the eruption center).

On February 15th, volcanic ash has reached the district of Kebumen with a thickness of up to 3 cm. The ash rain in Kebumen was followed by rain, resulting in mud rain. It was reported that volcanic ash also reached the area of Ciamis district, the city of Bandung and several other areas in West Java.